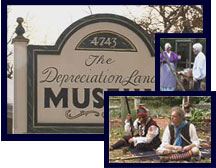 Overview
The north central area of Allegheny County presently known as Hampton Township was first settled in the late 18th century (1754-1763). Western Pennsylvania was the first frontier of the United States to be settled after the Revolutionary War and movement of people to areas north of the Allegheny, Monongahela and Ohio Rivers occurred as hunters and trappers moved into the game rich lands seeking fur for trade and sale.

John McCaslin secured title to a large tract of land in 1794, at the junction of Mt. Royal Boulevard and Route 8, now known as Oak Hill Farms. Alex McDonald, Frank Black and other early settlers, were joined later by Robert and James Sample, Robert Horde, William and Henry McCully and John McNeal. Certain segments of the Township roadway network and recognizable geographic landmarks bear these early pioneers' names and some present day residents of the Township can trace their roots back to that period of settlement.

Historic Hampton Township
The book Historic Hampton Township traces the first settlers of this area and explains how the township developed and grew from what was then known as Depreciation Land Grants awarded to Revolutionary war veterans. this volume is loaded with hundreds of old photos that chronicle community life and the evolution of the township since it was established in 1861.

Historic Hampton Township is a must for anyone who has an interest in local history or would just like to learn more about our special community. It could be that unique gift for a special person. Proceeds from the sale of this book benefit the Hampton Township Depreciation Lands Museum. Copies can be purchased at the Museum Gift Shop on South Pioneer Road.
Login
Online Registrations
Online Forms
Request for Services (Complaints)
FAQs
Stay Notified
A Community of Pride, Progress and Tradition
[]